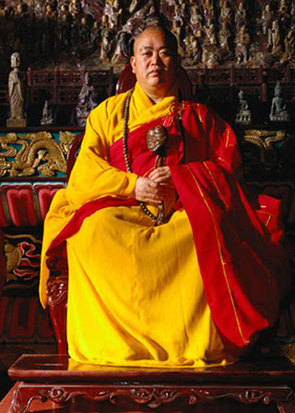 Born Liu Yingcheng, he began his study at the Shaolin Temple in 1981 at the age of 17. It was under the discipleship of former abbot Xingzheng that he converted to the Three Jewels and recieved the dharma name Shi Yongxin. For three years he travelled to other monastaries for Buddhist studies and cultivation, returning to the Shaolin Temple in 1984. He then assisted Xingzheng and the elders with daily operations until being fully oprdained at Pu Zhao Monastery, Jiangxi Province. He reamined there for the next three years, returning to Shaolin yet again in 1987. This time, returning to take over running the monastary after the passing of Xingzheng. Appointed director of Shaolin Temple Management Committee, he served the temple in this capacity until officially inaugurated Shaolin Abbot in August of 1999.

Since his inauguation, Ven. Abbot Yongxin has done much for Shaolin. He has overseen numerous renovations as well as the compiling and classification of classic Shaolin texts. Such works include: The Secret Book of Shaolin Kung Fu and Medicine, Shaolin Kungfu and Works of Shaolin Kungfu, Chan Dew Collections, Selected Papers on Shaolin Study, Shaolin in My Heart, and other such titles. He has been tireless in his efforts to restore, revitalize, and protect "the tangible and intangible heritage of Shaolin Temple." Ven. Abbot Yongxin also promotes cultural exchanges--both foreign and domestic-- as well as various Buddhist activities in order to help spread the Shaolin culture.

Ven. Abbot Yongxin has received various appointments throughout his tenure, including: